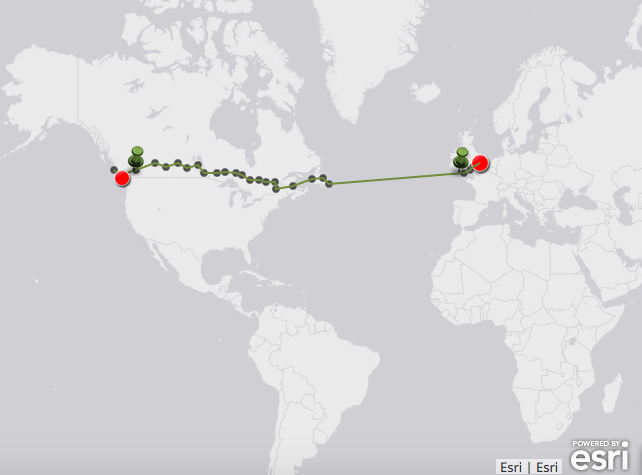 Route one: Road and shipping route – (meeting point: Newfoundland) - Filipska will walk a route from her home on the edge of the Fens in the East of England along the Ickneild way- the ancient chalk spine of England to Dorset tracing the routes of various Drovers roads into Cornwall. In Poldu, Cornwall her footsteps will be converted to nautical miles and follow a shipping route to Newfoundland. Butler’s Journey will take her from her home in Ucluelet, Vancouver Island to Saint John's Newfoundland, crossing Canada, roughly following the 50th Parallel and the Pinetree Line - a series of now defunct 'pulse mode' radar stations established in the 1950's as a nuclear warning system.

Route two: Great Circle route – (halfway point: Baffn Bay). Great circle route navigation involves calculating of the shortest distance between two points on a sphere, a technique often used by mariners; Filipska’s route takes her towards Scotland, crossing the Atlantic, skirting Iceland and crossing Greenland into Baffin bay. Butler’s route takes her through Canada towards Nunavut and into the Arctic.

Route Three: Land route - (halfway point: Olyokminsky, Russia). Filipska’s route takes her through the channel tunnel, up the coast of France and Belgium and due east - a route which is completely flat until the Ural Mountains. Butler’s route takes her up the coast of British Columbia toward the Gulf of Alaska, passing Anchorage and crossing the Denali National Park. She will then cross the Bering Straight (only passable by land when frozen) and enter Russian territories, meeting Filipska at Olyokminsky on the Lena River.

i want a website like this
Ucraft is committed to preventing phishing, malware and other types of fraud. In case of noticing any actions that violate applicable laws, regulations or third-party rights, please file your report here.
Ucraft is a free website builder that provides web designers, marketers and business owners with a set of web design tools to start their next awesome project in minutes. No coding or designer skills needed. Go to Ucraft